Top 10 Best Long Lasting Arabic Perfumes For Men And Women....Fragances That Has Longevity And Sillage....Will Last All Day.

BEST AVENTUS CLONES OF ALL TIME

• Balsam of Peru, from the Myroxylon, used in food and drink for flavoring, in perfumes and toiletries for fragrance, and in medicine and pharmaceutical items for healing properties.

• Basil oil is used in making perfumes, as well as in aromatherapy

• Bergamot oil, used in aromatherapy and in perfumes.

• Black Pepper essential oil is distilled from the berries of Piper nigrum. The warm, soothing effect makes it ideal for treating muscle aches, pains and strains and promoting healthy digestion.

• Camphor is used for cold, cough, fever, rheumatism, and arthritis

• Cannabis flower essential oil, used as a flavoring in foods, primarily candy and beverages. Also used as a scent in perfumes, cosmetics, soaps, and candles.

• Cardamom seed oil, used in aromatherapy and other medicinal applications. Extracted from seeds of subspecies of Zingiberaceae(ginger). Also used as a fragrance in soaps, perfumes, etc.

• Chamomile oil, There are many varieties of chamomile but only two are used in aromatherapy- Roman and German. Both have similar healing properties but German chamomile contains a higher level of azulin (an anti-inflammatory agent).

• Citronella oil, from a plant related to lemon grass is used as an insect repellent, as well as medicinally.

• Davana oil, from the Artemisia pallens, used as a perfume ingredient and as a germicide.

• Eucalyptus oil, historically used as a germicide. Commonly used in cough medicine, among other medicinal uses.

• Fenugreek oil, used medicinally and for cosmetics from ancient times.

• Frankincense oil, used for aromatherapy and in perfumes.

• Geranium oil, used medicinally, particularly in aromatherapy, used for hormonal imbalance, for this reason geranium is often considered to be "female" oil.

• Grapefruit oil, extracted from the peel of the fruit. Used in aromatherapy. Contains 90% limonene.

• Lemon oil, similar in fragrance to the fruit. Unlike other essential oils, lemon oil is usually cold pressed. Used medicinally, as an antiseptic, and in cosmetics.

• Lemongrass is a highy fragrant grass from India. In India, it is used to help treat fevers and infections. The oil is very useful for insect repellent.

• Mentha arvensis oil/Mint oil, used in flavoring toothpastes, mouthwashes and pharmaceuticals, as well as in aromatherapy and other medicinal applications.

• Moringa oil, can be used directly on the skin and hair. It can also be used in soap and as a base for other cosmetics.

• Mugwort oil, used in ancient times for medicinal and magical purposes. Currently considered to be a neurotoxin.

• Mustard oil (essential oil), containing a high percentage of allyl isothiocyanate or other isothiocyanates, depending on the species of mustard

• Neroli is produced from the blossom of the bitter orange tree.

• Orange oil, like lemon oil, cold pressed rather than distilled. Consists of 90% d-Limonene. Used as a fragrance, in cleaning products and in flavoring foods.

• Orris oil is extracted from the roots of the Florentine iris (Iris florentina) and used as a flavouring agent, in perfume, and medicinally.

• Perilla essential oil, extracted from the leaves of the perilla plant. Contains about 50–60% perillaldehyde.

• Pennyroyal oil, highly toxic. It is abortifacient and can even in small quantities cause acute liver and lung damage.

• Peppermint oil, used in a wide variety of medicinal applications.

• Pine oil, used as a disinfectant, and in aromatherapy.

• Rosehip oil, distilled from the seeds of the Rosa rubiginosa or Rosa mosqueta. Used medicinally.

• Rosemary oil, distilled from the flowers of Rosmarinus officinalis. Used in aromatherapy, topically to sooth muscles, and medicinal for its antibacterial and antifungal properties.

• Sandalwood oil, used primarily as a fragrance, for its pleasant, woody fragrance.

• Sassafras oil, from sassafras root bark. Used in aromatherapy, soap-making, perfumes, and the like. Formerly used as a spice, and as the primary flavoring of root beer, inter alia.

• Spearmint oil, often used in flavoring mouthwash and chewing gum, among other applications.

• Spruce has calming and elevating properties. It can be used as a topical application for muscular aches and pains, poor circulation, and rheumatism. Spruce Oil has also been used to improve breathing conditions of asthma, bronchitis, coughs, and general weakness.

• Star anise oil, highly fragrant oil using in cooking. Also used in perfumery and soaps, has been used in toothpastes, mouthwashes, and skin creams.[9] 90% of the world's star anise crop is used in the manufacture of Tamiflu, a drug used to treat influenza, and is hoped to be useful for avian flu

• Tea tree oil, extracted from Melaleuca alternifolia; promoted for medicinal use, but with limited evidence of effectiveness.

• Valerian is used for insomnia, migraines, nervous dyspepsia, and dandruff.

• Vetiver oil (khus oil) a thick, amber oil, primarily from India. Used as a fixative in perfumery, and in aromatherapy

• Ylang-ylang is used for calming, antiseptic, and aphrodisiac purposes, as well as hypertension and skin diseases. 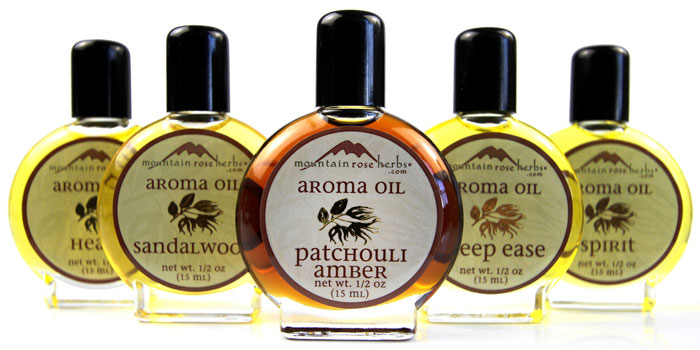